CCP4 exists to produce and support a world-leading, integrated suite of programs that allows researchers to determine macromolecular structures by X-ray crystallography, and other biophysical techniques. CCP4 aims to develop and support the development of cutting edge approaches to experimental determination and analysis of protein structure, and integrate these approaches into the suite. CCP4 is a community based resource that supports the widest possible researcher community, embracing academic, not for profit, and for profit research. CCP4 aims to play a key role in the education and training of scientists in experimental structural biology. It encourages the wide dissemination of new ideas, techniques and practice.

The Collaborative Computational Project Number 4 in Protein Crystallography was set up in 1979 to support collaboration between researchers working on such software in the UK, and to assemble a comprehensive collection of software to satisfy the computational requirements of the relevant UK groups. CCP4 was originally supported by the UK Science and Engineering Research Council (SERC), and is now supported by the Biotechnology and Biological Sciences Research Council (BBSRC). The project is coordinated at STFC Rutherford Laboratory by the Scientific Computing Department of STFC. The results of this effort gave rise to the CCP4 program suite, which is distributed to academic and commercial users world-wide.

CCP4 is overseen by two committees:

See the Staff Page for current members of the Executive Committee, and current developers.

There are separate licences for academic and commercial groups, see Licensing Page. 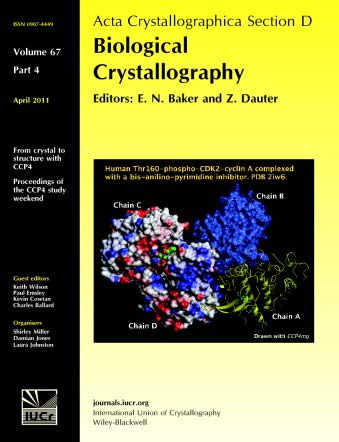 Any publication arising from use of the CCP4 software suite should include both references to the specific programs used (see the References section of the distributed documentation) and the following reference to the CCP4 suite:

Such citations are vital to the CCP4 project, and individual program authors, in maintaining funding and thus being able to develop CCP4 further.

Many relevant articles can be found in the proceedings of the 2010 Study Weekend, published as a special issue of Acta Cryst D.

Philosophy of the CCP4 suite

Unlike many other packages, particularly for small molecule crystallography, the CCP4 suite is a set of separate programs which communicate via standard data files, rather than all operations being integrated into one huge program. This has some disadvantages in that it is less easy for programs to make decisions about what operation to do next - though it is seldom a problem in practice - and that the programs are less consistent with each other (although much work has been done to improve this). However the great advantage arising from such loose organisation is that it is very easy to add new programs or to modify existing ones without upsetting other parts of the suite. Converting a program to use the standard CCP4 file formats is generally straightforward, and the philosophy of the collection has been to be inclusive, so that several programs may be available to do the same task. The components of the whole system are thus a collection of programs using a standard software library to access standard format files (and a set of examples files and documentation) available for most operating systems (including Linux, Windows and Mac OS X). Programs are mostly written in C, C++, Fortran and Python.

To use the programs the user must assign input and output files, and run the programs. Often an output file becomes the input to the next step, and system parameter substitution may be used to create filenames in a systematic way. Most crystallographic calculations involve a series of steps in which no decisions need be made until the end, and a command file provides an easy way of chaining calculations.

Standard file formats are defined for the principal data types used in crystallography: reflection data; density maps; and atom coordinates. In defining these formats, a number of trade-offs are made between efficiency (in space and access time), flexibility, portability, and simplicity of use.

There is a policy of continual technical and scientific updates to the suite. Where existing programs have been incorporated into the suite they have often subsequently undergone considerable modification above that needed to use the CCP4 file formats.

Helpdesk
Bug reports and/or problems running the programs should be sent to ccp4@ccp4.ac.uk. We will endeavour to help where we can (but note that no warranty for the software is given or implied). But remember that we are not psychic and cannot solve problems without the necessary information (so send input script, entire log file and relevant data files).
Documentation
Individual program documentation is available, together with a PostScript version of the CCP4 manual with content distinct from the program documentation (about 1.5 MB). The corresponding files are distributed with the suite.
Problems pages
If you are having problems with CCP4 programs either compiling or running then have a look at the Problem Page. This contains various fixes effected since the latest release.
Tutorials, examples and test data sets
A set of tutorials is distributed with the program suite, see the examples/tutorial subdirectory. There are also a large number of individual examples, see the examples/unix/runnable subdirectory. The tutorials and examples use distributed test data.
Email distribution lists
The most popular is the Bulletin Board for general questions on protein crystallography (not necessarily CCP4-related). We also run a developers' list, and several other project-based lists.
Meetings
CCP4 organises and/or sponsors several meetings a year, see the Courses page. The most important of these is the two-day Study Weekend held each year on a chosen subject, just after the New Year. Back copies of the proceedings to these meetings are available.
Newsletter
CCP4 publishes an occasional newsletter and some older issues are available by anonymous ftp. From June 1996, newsletters are available in html format.